Bronze figure of a kneeling man representing a Southerner at The British Museum, London

3D
Scan The World
4,239 views 91 downloads
1 collection
Community Prints Add your picture
Be the first to share a picture of this printed object
0 comments

Bronze figure of a kneeling man representing a Southerner at The British Museum, London

Though similar to small castings found in the provinces of the Southwest, including Guanxi, such figures have been found in royal tombs in the North, and may represent tribute bearers.

The Han dynasty was the second imperial dynasty of China, preceded by the Qin dynasty and succeeded by the Three Kingdoms period. Spanning over four centuries, the Han period is considered a golden age in Chinese history. To this day, China's majority ethnic group refers to itself as the "Han people" and the Chinese script is referred to as "Han characters". It was founded by the rebel leader Liu Bang, known posthumously as Emperor Gaozu of Han, and briefly interrupted by the Xin dynasty. This interregnum separates the Han dynasty into two periods: the Western Han or Former Han  and the Eastern Han or Latter Han.

The emperor was at the pinnacle of Han society. He presided over the Han government but shared power with boththe nobility and appointed ministers who came largely from the scholarly gentry class. The Han Empire was divided into areas directly controlled by the central government using an innovation inherited from the Qin known as commanderies, and a number of semi-autonomous kingdoms. These kingdoms gradually lost all vestiges of their independence, particularly following the Rebellion of the Seven States. From the reign of Emperor Wu onward, the Chinese court officially sponsored Confucianism in education and court politics, synthesized with the cosmology of later scholars such as Dong Zhongshu. This policy endured until the fall of the Qing dynasty in 1911 AD.

The Han dynasty was an age of economic prosperity and saw a significant growth of the money economy first established during the Zhou dynasty (c. 1050–256 BC). The coinage issued by the central government mint in 119 BC remained the standard coinage of China until the Tang dynasty (618–907 AD). The period saw a number of limited institutional innovations. To pay for its military campaigns and the settlement of newly conquered frontier territories, the government nationalized the private salt and iron industries in 117 BC, but these government monopolies were repealed during the Eastern Han period. Science and technology during the Han period saw significant advances, including papermaking, the nautical steering rudder, the use of negative numbers inmathematics, the raised-relief map, the hydraulic-powered armillary sphere for astronomy, and aseismometer employing an inverted pendulum.

Printed by PRINT3Dforum.com Printing Services - Just some support requierd for the head part. Other than that, pretty straightforward print. 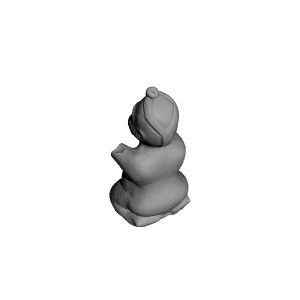 ×
1 collections where you can find Bronze figure of a kneeling man representing a Southerner at The British Museum, London by Scan The World