Bronze Foot in the Form of a Sphinx at The Metropolitan Museum of Art, New York

3D
Scan The World
2,579 views 117 downloads
Community Prints Add your picture
Be the first to share a picture of this printed object
0 comments

Bronze Foot in the Form of a Sphinx at The Metropolitan Museum of Art, New York

This is a bronze foot in the form of a sphinx originally made in Greece around 600 BC. It was a gift from the family of Howard J. Barnet in his memory, 2000. Between the eighth and sixth centuries B.C., elaborate bronze vessels were among the preeminent creations of Greek artists. This foot was probably one of three supporting an extremely large, shallow basin. Mythilogical creatures such as the sphinx here and the griffin nearby (also uploaded on Scan The World and MyMiniFactory) nearby should be understood as guardian figures and not simply decoration. 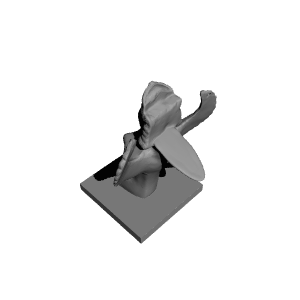