This bronze head (height 27 cm) originates from the thirteenth or twelfth century BCE that was excavated from Pit 1 in Sanxingdui. Read mroe about the Sanxingdui Bronzes here

Amid the once-tranquil village of Sanxingdui, in a quiet part of Sichuan province in China, a remarkable discovery took place which immediately attracted international attention and has since rewritten the history of Chinese civilisation. Two giant sacrificial pits were unearthed containing thousands of gold, bronze, jade, ivory and pottery artifacts that were so unusual and unlike anything ever found in China before, that archaeologists realised they had just opened the door to an ancient culture dating back between 3,000 and 5,000 years.

In the spring of 1929, a farmer was digging a well when he discovered a large stash of jade relics. This was the first clue that eventually led to the discovery of a mysterious ancient kingdom. Generations of Chinese archaeologists searched the area without success until 1986, when workers accidentally found the pits containing thousands of artifacts that had been broken, burned, and then carefully buried.

The discovery of the artifacts opened up a world of intrigue. The objects found in the sacrificial pits included animal-faced sculptures and masks with dragon ears, open mouths and grinning teeth; human-like heads with gold foil masks; decorative animals including dragons, snakes, and birds; a giant wand, a sacrificial altar, a 4-metre tall bronze tree; axes, tablets, rings, knives, and hundreds of other unique items.

Sanxingdui (Chinese: 三星堆; pinyin: Sānxīngduī; literally: "three stars mound") is the name of an archaeological site and the previously unknown Bronze Age culture for which it is the type site. Sanxingdui is now believed to be the site of a major ancient Chinese city in what is now Sichuan, China. The Bronze Ageculture which inhabited it was re-discovered in 1987 whenarchaeologists excavated remarkable artifacts, that radiocarbon dating dated as being from the 12th-11th centuries BCE. The culture that produced these artifacts is now known as the Sanxingdui Culture, and archeologists are identifying it with the ancient kingdom of Shu. The artifacts are displayed in the Sanxingdui Museum located near the city of Guanghan.

The discovery at Sanxingdui, as well as other discoveries such as the Xingan tombs in Jiangxi, challenges the traditional narrative of Chinese civilization spreading from the central plain of the Yellow River, and Chinese archaeologists have begun to speak of "multiple centers of innovation jointly ancestral to Chinese civilization." 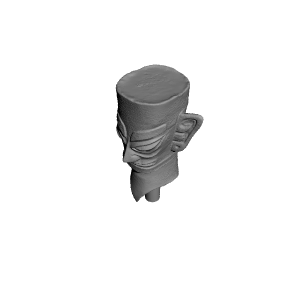 ×
4 collections where you can find Sangxingdui Bronze Head at The Museum of Natural Science of Houston, USA by Scan The World
×
Andrew Wu
@andrewwu
0
Printed on: Other
Material: PLA
Posted at: 08th October 2017