In 31 BC he defeated Mark Antony and Cleopatra at the battle of Actium and took possession of Egypt, which became a Roman province. The writer Strabo tells us that statues of Augustus were erected in Egyptian towns near the first cataract of the Nile at Aswan and that an invading Kushite army looted many of them in 25 BC.

Although Roman counter-attackers reclaimed many of the statues, they did not reach Meroë, where this head was buried beneath the steps of a native temple dedicated to Victory. It seems likely that the head, having been cut from its statue, was placed there deliberately so as to be permanently below the feet of its Meroitic captors.

The head of Augustus appears larger than life, with perfect proportions based upon Classical Greek notions of ideal human form. His calm distant gaze, emphasised with inset eyes of glass and stone, give him an air of quiet, assured strength.

Coins and statues were the main media for propagating the image of the Roman emperor. This statue, like many others throughout the Empire, was made as a continuous reminder of the all-embracing power of Rome and its emperor. 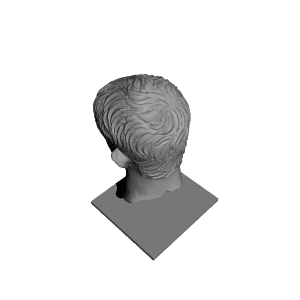 Bronze Head of Augustus replicated in aerated concrete on a 5 axis CNC machine for natural stone. The head is 50 cm high.