3D
360°
Scan The World
1,357 views 59 downloads
Community Prints Add your picture
Be the first to share a picture of this printed object
0 comments

Miguel Hernández Gilabert (30 October 1910 – 28 March 1942) was a 20th-century Spanish language poet and playwright associated with the Generation of '27 movement and the Generation of '36 movement. He was born in Orihuela, in the Valencian Community, to a poor family and received little formal education; he published his first book of poetry at 23, and gained considerable fame before his death. He was unable to escape Spain after the Republican surrender and was arrested multiple times for his anti-fascist sympathies, he was eventually sentenced to death, a sentence which was commuted to 30 years of prison time. His sentence saw him incarcerated in multiple jails under extremely harsh conditions which led to his death by tuberculosis in 1942. 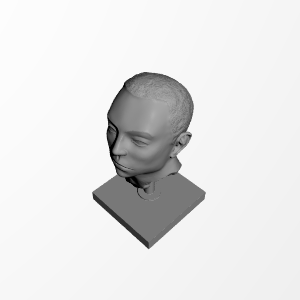