3D
Scan The World
1,941 views 97 downloads
1 collection
Community Prints Add your picture
Be the first to share a picture of this printed object
0 comments

This is a slightly larger than life head (possibly life/deathmask) carved out of marble with a bronze base by Geo (Georges) Verbanck (Ghent, February 28th 1881 - Aartselaar, December 12th 1961), well known for this sculptures in bluestone, marble, sandstone and bronze. He made his first experiences in the workshops of carpenters and sculptors and later went on to study at the Royal Academy in Ghent and Brussels. He became a professor and teacher to Dendermonde where he worked on the construction of the new courthouse in Ghent.

He was also known to design monuments, medals, coins, busts and drawings. 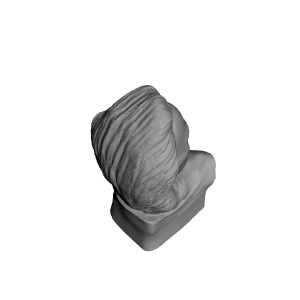 ×
1 collections where you can find Brunhilde in the Fin-de-Siècle Museum, Brussels, Belgium by Scan The World