Budai at The Kiev Museum of Western and Oriental Art, Ukraine

3D
Support Free Scan The World
2,866 views 142 downloads
2 collections
Community Prints Add your picture
Be the first to share a picture of this printed object
0 comments

Budai at The Kiev Museum of Western and Oriental Art, Ukraine

Budai or Pu-Tai is a Chinese folkloric deity. His name means "Cloth Sack," and comes from the bag that he is conventionally depicted as carrying. He is usually identified with or seen as an incarnation of Maitreya, the future Buddha, so much so that the Budai image is one of the main forms in which Maitreya is depicted in China. He is almost always shown smiling or laughing, hence his nickname in Chinese, the Laughing Buddha (Chinese: 笑佛; pinyin: Xiào Fó). In the West, the image of Budai is often mistaken for Gautama Buddha, and is hence called the Fat Buddha (Chinese: 胖佛; pinyin: Pàng Fó). 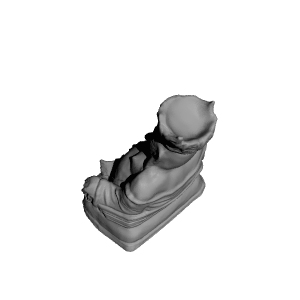 ×
2 collections where you can find Budai at The Kiev Museum of Western and Oriental Art, Ukraine by Scan The World