3D
Scan The World
2,965 views 185 downloads
Community Prints Add your picture
Be the first to share a picture of this printed object
0 comments

Budai or Pu-Tai, or 布袋 (Hotei) in Japanese, Bố Đại in Vietnamese, is a Chinese folkloric deity. His name means "Cloth Sack," and comes from the bag that he is conventionally depicted as carrying. He is usually identified with or seen as an incarnation of Maitreya, the future Buddha, so much so that the Budai image is one of the main forms in which Maitreya is depicted in East Asia. He is almost always shown smiling or laughing, hence his nickname in Chinese, the Laughing Buddha In the West, the image of Budai is often mistaken for Gautama Buddha.

This wooden sculpture (decorated with gold lacquer) originates from the Henan Province in the 16th-17th Century (Ming dynasty). From the Song dynasty (960-1278) the Monk with the Cloth Bag became equated with the Buddha of the Future, Maitreya. Statues of the fat-bellied Budai are often found in the entrance halls of Buddhist temples. 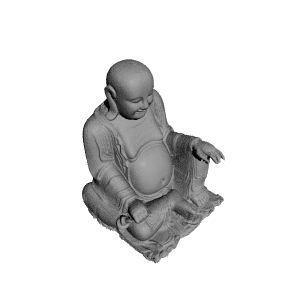 ×
0 collections where you can find Budai at The Royal Ontario Museum, Ontario by Scan The World