The Buddha triumphing over Mara at The Art Institute of Chicago, Illinois

The Buddha triumphing over Mara at The Art Institute of Chicago, Illinois

The lump on the top of his head is sometimes said to indicate extraordinary wisdom. He is represented in a posture portrayed widely, seated with his legs crossed in a meditative position. The twisted garland of beads behind the Buddha’s head represents his halo, a symbol of radiance. Around the inside of this halo, incised in low relief, is a standard formulation of a basic Buddhist belief: “The Buddha has explained the cause of all things that arise from a cause. He, the great monk, has also explained their cessation.” Here we see elements that tell us we’re in the presence of the Buddha as he was on the threshold of achieving enlightenment. Above his head are branches of heart-shaped leaves. They indicate the sacred bodhi tree, under which he is said to have attained enlightenment some 2,500 years ago. His right hand reaches downward to touch the pedestal—symbolizing the ground on which he sat. Buddha images seated with the right hand in this earth-touching gesture memorialize the victory of the Buddha-to-be over the demon Mara, an embodiment of delusion and uncontrolled passions. After many lifetimes of spiritual and intellectual preparation, while the Buddha-to-be sat in meditation under the bodhi tree, he and Mara repeatedly challenged each other’s power and accomplishments. Mara approached at the head of a monstrous army, determined to stop the Buddha’s enlightenment. The Buddha stretched out his right hand, calling out to the earth to witness his right to attain Buddhahood. The mighty earth thundered, “I bear you witness with a hundred thousand roars.” And Mara’s followers fled. This sculpture was created in northeastern India, near Bodh Gaya, the site where the momentous event is said to have occurred. Over the centuries, pilgrims from all over Asia have journeyed to this sacred Buddhist site, returning home with texts and artworks that carried Buddhism to other parts of the world. Today, they still travel to Bodh Gaya to see the descendant of the Buddha’s bodhi tree.

Buddhism has deeply influenced the character and evolution of Asian civilization over the past 2,500 years. It is based on the teachings of a historical figure, Siddhartha Gautama, who lived around the fifth century BCE. As it moved across Asia, Buddhism absorbed indigenous beliefs and incorporated a wide range of imagery, both local and foreign, into its art and religious practices. Buddhism continues to evolve as a religion in many parts of the world. Buddhism is a complex subject, a philosophy that has evolved in many different ways and various regions of Asia, and is still a living faith today. Providing simple definitions for the beliefs and art historical developments of Buddhism is therefore difficult, because so many variations occur. The student of Buddhism should be aware of these variations and points of view. Here we provide a very general overview as a foundation for looking at historical Buddhist arts, focused on the art of India.

The historical Buddha-to-be, Siddhartha Gautama, was born around the 6th century BCE into royalty at Kapilavastu, which lay in the foothills of the Himalayas near the present day Nepalese-Indian border. For most of his youth, the prince led a sheltered existence within the palace, where he enjoyed court life, married a princess, and had a son. Venturing forth from the palace, he finally witnessed disturbing sights he had never before experienced: sickness, old age, death, and a mendicant ascetic. Deeply unsettled by what he had seen, the prince finally renounced his worldy life, and set out on a quest for truth, to confront human suffering and the continuous cycle of birth, death, and rebirth (samsara). Along with other thinkers who lived during this era, the Buddha was also troubled by the caste system, which denied many the possibility of salvation, as well as by the exclusivity and abuses of the brahman priestly caste who controlled religious practices at that time. The Buddha sought to find an end to human suffering. He first engaged in extreme austerities as practiced by mendicants and ascetics of his time. After several years of these practices, Siddhartha concluded that this extreme path was not the correct route to perfect understanding (enlightenment). Rather, he proposed that a middle way between extreme austerity and extreme indulgence was the path to wisdom and freedom from suffering. The Buddha declared that he would meditate under a banyan tree until he achieved enlightenment. This phenomenal event occurred at Bodh Gaya in the contemporary state of Bihar, which is one of Buddhism’s great pilgrimage sites.

As a result of his attainment of enlightenment, the prince Siddhartha Gautama was now truly the Buddha, the Enlightened One. He was also commonly referred to as Shakyamuni, the sage of the Shakya clan. The Buddha distilled the principles of enlightenment into a doctrine known as The Four Noble Truths. These are:

Though it evades easy definition, and it varies according to the particular branch of Buddhism, the ultimate goal of most Buddhists is to reach nirvana, a state of bliss in which human desire, ego, and suffering are extinguished. As a collective faith, Buddhism first developed in northeastern India with the historical Buddha’s own followers, who formed a community of monks and laypersons during his lifetime. Those wishing to join the monastic order renounced family and worldly ties, and proclaimed their faith in the “three jewels”: the Buddha, the doctrine (dharma), and the monastic community (sangha). After the Buddha’s death, concerns arose regarding the interpretation and survival of the order and doctrine. A first council established a set of beliefs on the basis of those surviving monks who could remember what the Buddha had said. Subsequent councils added to these sayings. Debates arose over the apparent contradiction between no-self and rebirth (how could one be reborn if there was no self?), and over the questions of who could be enlightened and whether enlightenment was gradual or spontaneous. By the beginning of first millennium, there were approximately eighteen different schools of Buddhism in India.

Easy print, only need support for the head. 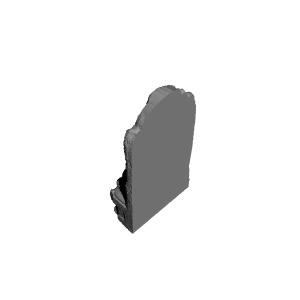 ×
8 collections where you can find The Buddha triumphing over Mara at The Art Institute of Chicago, Illinois by Scan The World
×
Philippe Barreaud
@philippeb66
2
Printed on: Sindoh 3DWOX 1
Material: PLA
Posted at: 25th September 2022