3D
Scan The World
2,753 views 108 downloads
Community Prints Add your picture
Be the first to share a picture of this printed object
0 comments

We do not know what religious context this image of the Buddha was based on. This representation is consistent with the particular aesthetic of the classical period of Pagan and refers directly to the sculptures discovered in the monuments of the great Burmese capital (eleventh-thirteenth century vicinity) to its historical and artistic peak. Nevertheless, the flat, square face suggests a slightly later dating. Some images of the same iconography have been discovered in various temples in the city of Pagan. The taking of this city by the Mongols in 1287, led to some decline and fragmentation of the country, but not a crash of artistic creation, as evidenced by this work. 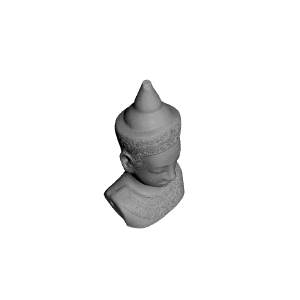 ×
0 collections where you can find Buddha paré at the Guimet museum, Paris, France by Scan The World