Buddha Protected by the Naga at The Guimet Museum, Paris

3D
Scan The World
3,229 views 220 downloads
Community Prints Add your picture
Be the first to share a picture of this printed object
0 comments

Buddha Protected by the Naga at The Guimet Museum, Paris

This sculpture is the head of a Buddha sitting in meditation (samadhi) on the naga Mucilinda represents, according to one interpretation, an episode in the life of Sakyamuni. This one, lost in meditation, was to be swallowed up by the waters of a lake Mucilinda inhabiting these waters, then protected him by deploying multiple heads that appear here overlooking the figure. Sitting on the coiled body of the snake, the Buddha seems to be inducted. Inherited by his hieratic style of the tenth centuryas well as its abundant adornment, this statue is typical of the style of Angkor Wat. The wide face in a square it presents an artificial morphology and stylized patterned mask is crossed by the line of continuous and sharp brows. This representation of Buddha protected by the naga is an archetypal image Cambodia, appearing -in the current state of connaissances- at the beginning of the tenth century it will then be very popular in the Angkorian statues. This representation is becoming particularly important in Cambodia, where the naga is linked to the origins of the Khmer kingdom. 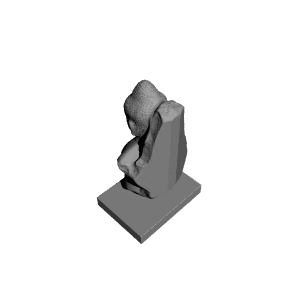 ×
0 collections where you can find Buddha Protected by the Naga at The Guimet Museum, Paris by Scan The World