3D
1,099 views 14 downloads
Community Prints Add your picture
Be the first to share a picture of this printed object
0 comments

"Wake up Mumbo!" exclaimed Bowie, as he shook her shoulders vigorously. "Mmm Gm..." groaned Mumbo, who wasn't ready to wake up at all. Mumbo and Bowie had stayed up all night decorating their very own homemade aircraft, that they were going to ride in the famous Buddyland Aircraft race. "Mumbo! We're competing today!" Bowie yelled. Mumbo shot out of bed, "Oh no! We're going to be late." Mumbo pulled her signature sweater over her head, and clipped her bow on. They raced out the door to their garage, where the aircraft was placed. Mumbo and Bowie had planned all night and day for this, hoping to place a spot in the competition. Their whole neighborhood was betting on their win! The Mumbow team, a mix of Mumbo and Bowie, weren't going to let them down.

"Hurry up!" yelped Squiddy, who was helping Eelzer repair their broken wing. it was early in the morning, but Squiddy had heard a tremendous crash, and when he looked outside, saw that the wing of their aircraft was completely broken! Their aircraft was a spaceship, with a blue, white, and red color scheme. Squiddy ran to get Eelzer, and together they were attempting to fix it. This Miniature Marine Machine Team was determined to win!

While both teams were frantically trying to touch up, the Buddyland town was bustling with excitement. Bowie's mom had even made a homemade sign with "Go Mumbow!" written all over it! One monster was eating ice-cream, and dressed in red, white, and blue for the Marine Machine Team! All of the monster's of Buddy land would always collect around the racetrack to watch the Buddyland games.

THREE, TWO, ONE, GO! Mumbow and Marine Machine, race to the finish line!!! 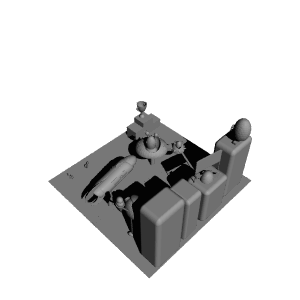 ×
0 collections where you can find Buddyland Aircraft race by mushrooms888