3D
Scan The World
2,722 views 183 downloads
1 collection
Community Prints Add your picture
Be the first to share a picture of this printed object
0 comments

Lamps were made in Classical lands from the Bronze Age onwards. They were used in the home, in shops, in public buildings such as temples and bath-buildings; lamps were carried in religious processions, dedicated at shrines and placed in tombs.

Ancient lamps were made in terracotta, metal, stone and glass. From Minoan times until about the 7th century BC, open bowls with a wick-rest at the rim were used. Terracotta lamps were wheelmade until the 3rd century BC, when the first mouldmade lamps were produced in Greek lands. Thereafter most classical lamps were mass-produced in moulds until the Arab conquests of the 7th century AD; lamp workshops were to be found in nearly every town. Bronze lamps, made as one-off objects by the lost-wax process, could be very simple or extremely complex. Conical glass lamps of late Roman times, with floating wicks, were suspended in holders.

Printed in FormFutura EasyFil White @ 215, heated bed @ 65, Med quality, 15% infill, standard support and raft settings. If your slicer puts support inside, you can take it out as its not required. 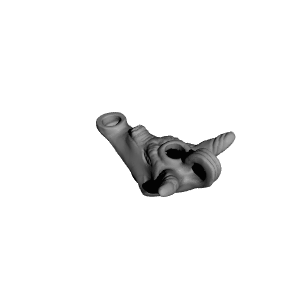 ×
1 collections where you can find Bull's Head Lamp at The British Museum, London by Scan The World