3D
Scan The World
1,950 views 54 downloads
Community Prints Add your picture
Be the first to share a picture of this printed object
0 comments

Vic Gentils made this portrait in 1972 for the seventy-fifth anniversary of the Antwerp mayor, Lode Craeybeckx (24 November 1897 - 25 July 1976). Craeybeckx was the founder of the Middelheim Museum where this sculpture is on permanent display. Gentils spoke about the piece; "So I've seen Lode Craeybeckx and made this sculpture [...] The head is open, to better communicate the openmindedness and hard working spirit of Craeybeckx. The image has a powerful image of a Socialist leader; the body is in the form of plowshares (field worker uniform) but can also be interpreted as the toga of a lawyer. The chest is open, because outside of politics Lode Craeybeckx was an extraordinary artistic and outspoken man". Take from that as you will. The piece is a good example of Gentils' sculptural technique. 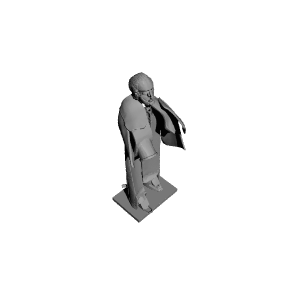 ×
0 collections where you can find Burgemeester Lode Craeybeckc at The Middelheim Museum, Antwerp by Scan The World