This urn has a face of a young woman. Its speciality comes from the different elements entertwined with the face. They could have been things that the woman liked in her lifetime and therefore wanted on her urn.

Funerary urns (also called cinerary urns and burial urns) have been used by many civilizations. After a person died, survivors cremated the body and collected the ashes in an urn. Pottery urns, dating from about 7000 BC, have been found in an early Jiahu site in China, where a total of 32 burial urns are found, and another early finds are in Laoguantai, Shaanxi. There are about 700 burial urns unearthed over the Yangshao (5000–3000 BC) areas and consisting more than 50 varieties of form and shape. The burial urns were used mainly for children, but also sporadically for adults.

The Urnfield culture (c. 1300 BC – 750 BC), a late Bronze Age culture of central Europe, takes its name from its large cemeteries of urn burials. The discovery of a Bronze Age urn burial in Norfolk, England, prompted Sir Thomas Browne to describe the antiquities found. He expanded his study to survey burial and funerary customs, ancient and current, and published it as Hydriotaphia or Urn Burial (1658).

In ancient Greece, cremation was usual, and the ashes typically placed in a painted Greek vase. In particular the lekythos, a shape of vase, was used for holding oil in funerary rituals. Romans placed the urns in a niche in a collective tomb called a columbarium (literally, dovecote). The interior of a dovecote usually has niches to house doves. Cremation urns were also commonly used in early Anglo Saxon England, and in many Pre-Columbian cultures.

Very elegant print that requires supports and maybe a brim. 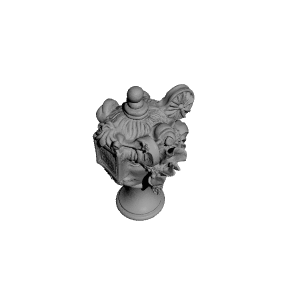 This is my first print. I had a lot of fun removing all those supports.