Bust of a Boy from the Augustus Family at The State Hermitage Museum, St Petersburg

3D
Support Free Scan The World
2,475 views 97 downloads
Community Prints Add your picture
Be the first to share a picture of this printed object
0 comments

Bust of a Boy from the Augustus Family at The State Hermitage Museum, St Petersburg

This portrait is one of many depictions of boys from the family of the Roman Emperor Octavian Augustus. Having no sons, Augustus adopted Gaius (20 BC - 4 AD) and Lucius (17 BC - 2 AD), sons of his daughter Julia from her marriage to Marcus Vipsanius Agrippa. Both died young and were deified after their deaths. Many depictions of them have survived. It is not possible to provide any more definite identification of the boy in this portrait, since in depictions of the heirs to the throne it was accepted practice to emphasize the family likenesses of the Julian dynasty. The portrait excellently conveys the fragility and gentleness of the child, the soft features, the calm, thoughtful expression. In the treatment of the hair, the drawing of the eyes and form of the head there is a clear likeness to Augustus himself. 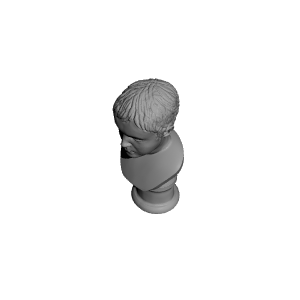 ×
0 collections where you can find Bust of a Boy from the Augustus Family at The State Hermitage Museum, St Petersburg by Scan The World