Bust of a Grotesque Old Woman at The Scottish National Gallery, Scotland

3D
Scan The World
2,809 views 145 downloads
Community Prints Add your picture
Be the first to share a picture of this printed object
0 comments

Bust of a Grotesque Old Woman at The Scottish National Gallery, Scotland

This is one of a group of busts of hideously old women by the same sculptor which may have mormed a series of the Three Fates. These were formely thought to be late-sixteenth century and to originate from the circle of Michelangelo, but they are in fact considerably later in date. The most credible attribution is to Montauti, who was active in Florence and later in Rome. He began as a medallist and bronze sculptor, and seems only to have turned his hand to marble in the mid 1720s. 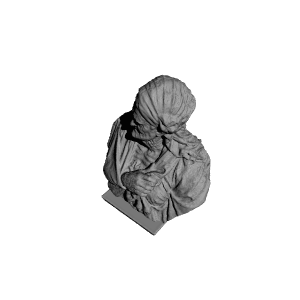 ×
0 collections where you can find Bust of a Grotesque Old Woman at The Scottish National Gallery, Scotland by Scan The World