Bust of a male

3D
Scan The World
1,415 views 72 downloads
Community Prints Add your picture
Be the first to share a picture of this printed object
0 comments

Bust of a male

This white marble bust of a roman man is dated around 110-120 AD and was fouund near Ostia (Rome).

Drawn and sagging features convey the advanced age of the man portrayed on this Roman portrait bust. The man's hairstyle--combed forward over his forehead and above his ears--allows scholars to date the work to the period from about A.D. 90 to 110, perhaps during the rule of the emperor Trajan (reigned A.D. 98 - 117).

Although many Roman portraits of private individuals copy the emperor's style, the extremely high quality of this portrait may suggest that this man was actually a relation or someone with close connections to the emperor.

The bust has suffered only minimal damage over time. Parts of the garment and the man's left ear have corroded. The bust has also lost its inlaid eyes. 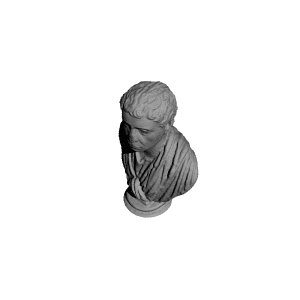