3D
360°
Scan The World
1,929 views 50 downloads
Community Prints Add your picture
Be the first to share a picture of this printed object
0 comments

This portrait probably represents Marcus Cornelius Fronto, master and friend of Marc-Auréle (Marcus Aurelius). Marcus Cornelius Fronto (c. 100 – late 160s), best known as Fronto, was Roman grammarian, rhetorician, and advocate. Of Berber origin, he was born at Cirta in Numidia. He was suffect consul for the nundinium of July-August 142 with Gaius Laberius Priscus as his colleague. Emperor Antoninus Pius appointed him tutor to his adopted sons and future emperors, Marcus Aurelius and Lucius Verus. 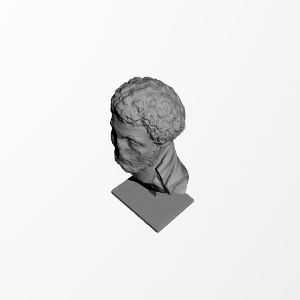 ×
0 collections where you can find Marcus Cornelius Fronto by geoffrey.marchal