Bust of a Roman Woman at The State Hermitage Museum, St Petersburg

3D
Scan The World
2,254 views 105 downloads
Community Prints Add your picture
Be the first to share a picture of this printed object
0 comments

Bust of a Roman Woman at The State Hermitage Museum, St Petersburg

The appearance of sculptural portraits in Ancient Rome had much to do with the cult of ancestors. Portraits were often made in the form of a small bust which was attached to a stone pillar or herm and placed in a tomb. The Hermitage portrait would seem to have been made for a burial vault, hence the master's attention to conveying a physical likeness. In sculptures of the early Empire period, including this piece, Greek traditions continued to influence the plastic working up of form and the softer modelling of the marble surface. At the same time the typical Roman approach was still reflected in the details of the fashionable hairstyle, the careful working up of the soft folds of the clothing attached to the shoulders with flat fibulae. The strict, simple nature of the bust can be explained by its funerary purpose. 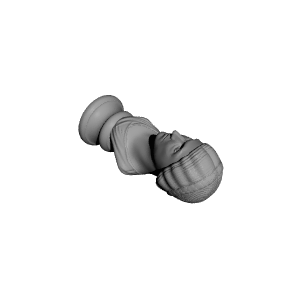 ×
0 collections where you can find Bust of a Roman Woman at The State Hermitage Museum, St Petersburg by Scan The World