Bust of the Apollo Lykeios

3D
Featured Scan The World
4,171 views 636 downloads
6 collections
Community Prints Add your picture
Be the first to share a picture of this printed object
0 comments

Bust of the Apollo Lykeios

The head was originally mounted in Albani's collection on a torso of Bacchus which was soon exchanged for a head of Bacchus found by Gavin Hamilton. As described by Townley, "A Head of Apollo larger than life. The hair is plaited over the forehead and tied in a knot behind. In the account book the head is described simply as 'a head of Apollo', and the same description was still used around 1781 (TY 12/1), but in the 'L' Catalogue of 1787-8, it was called 'Apollo Philesius' (TY 12/3). This description may be presumed to have appeared also in the fair copy of this catalogue, now in Towneley Hall, by the entry is concealed by a slip that has been pasted in, with a revised entry in Townley's hand designating the head as 'Apollo Iners', and repeating reference to Winckelmann, who 'speaks of this head, as a rare specimin of the sublime early style of Greek sculpture'.

It is believed to be from a sculpture of the Lyceus type, a style depicting Apollo originating from Praxiteles, which depicts the God resting on a support with his right forearm touching the top of his head. His hair is fixed in braids on top of a head typical of chilhood. Many sculptures follow this type and were used in later artworks, such as in the Amazon type statues and the  Sleeping Ariadne/Apollo. 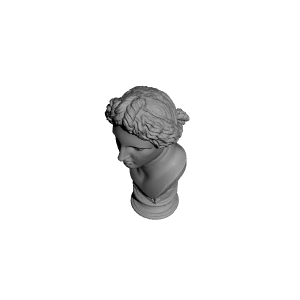