3D
Scan The World
4,617 views 279 downloads
2 collections
Community Prints Add your picture
Be the first to share a picture of this printed object
0 comments

A copy after the bust and head of the so-called 'Genius of the Vatican' or 'Eros of Centocelle' in the Vatican Museum. The original, a half-length statue, was discovered at Centocelle near Rome and bought by Pope Clement XIV. It was thought to represent Adonis.

Adonis is a figure of Greek mythology, son of mortals, Aphrodite fell in love with him and protected him. When he died she sprinkled the blood with nectar, and so it is the blood of Adonis that each spring turns to red the torrential river, the Adonis River in modern Lebanon. Therefore, modern scholarship sometimes describes him as an annually renewed, ever-youthful vegetation god, a life-death-rebirth deity whose nature is tied to the calendar.

His name is often applied in modern times to handsome youths, of whom he is the archetype. 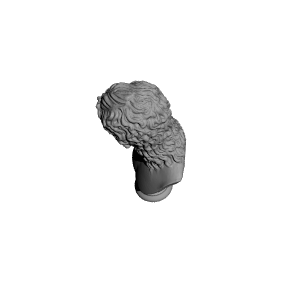