3D
360°
Scan The World
1,371 views 105 downloads
Community Prints Add your picture
Be the first to share a picture of this printed object
0 comments

Although it is known he was born in Athens, the records regarding his parentage and early life are conflicting; but it seems probable that his parents, though poor, were respectable. Aeschines' father was Atrometus, an elementary school teacher of letters. His mother Glaukothea assisted in the religious rites of initiation for the poor. After assisting his father in his school, he tried his hand at acting with indifferent success, served with distinction in the army, and held several clerkships, amongst them the office of clerk to the Boule. Among the campaigns that Aeschines participated in were Phlius in the Peloponnese (368 BC), Battle of Mantinea (362 BC), and Phokion's campaign in Euboea (349 BC). The fall of Olynthus (348 BC) brought Aeschines into the political arena, and he was sent on an embassy to rouse the Peloponnese against Philip II of Macedon. 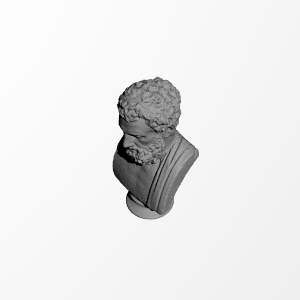