Bust of Alexander the Great

3D
Scan The World
3,480 views 310 downloads
3 collections
Community Prints Add your picture
Be the first to share a picture of this printed object
0 comments

Bust of Alexander the Great

The portrait of the infamous Macedonian king Alexander the Great has enthralled both artists and audiences for centuries. Described by Arrian as a 'strong, handsome commander with one eye dark as the night and one blue as the sky’, the enigmatic hero launched a series of military and political campaigns throughout India, Mesopotamia, and Asia Minor, diffusing Hellenic culture across three continents and forging a vast empire which forever altered the dynamic of the ancient world.The widely recognisable sculptural portrait of Alexander as the inspired ruler, typified by his youthful, beardless face and his tousled leonine hair swept upwards from the forehead (anastole), was first established by Lysippus. Plutarch records that 'it was by this artist alone that Alexander himself thought it fit that he should be modelled’. Nothing survives from this Greek sculptor’s body of work, but an extant Roman copy known as The Azara Herm, now in the Louvre, is considered to be the closest likeness to the original Lysippan portrait of the King.

Scanned at the Old Masters Sculpture & Works of Art Sale of the 6th of July 2017 at Sotheby's London. 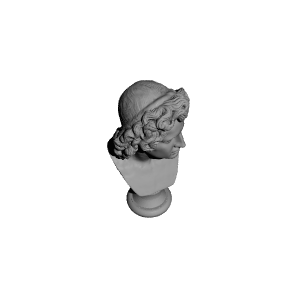