Bust of an African Man at The Wallace Collection, United Kingdom

3D
Scan The World
5,681 views 224 downloads
4 collections
Community Prints Add your picture
Be the first to share a picture of this printed object
0 comments

Bust of an African Man at The Wallace Collection, United Kingdom

This piece is placed at the Wallace Collection. The most important element of this part of the Wallace Collection is the French sculpture, which includes Germain Pilon's magisterial bronze portrait bust of King Charles IX made around 1570, two marble busts by the eighteenth-century sculptor Jean-Antoine Houdon and a superb assemblage of eighteenth - and early nineteenth-century bronzes, including portraits, mythological groups and small-scale copies of famous contemporary sculptures. In eighteenth-century France bronzes were produced to very high technical standards with much care being lavished on their finish. They were highly valued for their lustrous dark surfaces, which were thought to complement paintings especially well. The collection of Italian sculpture is also highly important and equally wide-ranging. It too includes an important group of Renaissance bronzes, notably an exquisite Seated Venus, the only known work by the Paduan sculptor Giovanni Fonduli da Crema, and a number of bronzes by or after the great Renaissance sculptor Giovanni Bologna. Among the marbles are Pietro Torrigiano's moving bust of Christ, made for Westminster Abbey, and Filippo della Valle's charming Cupid and Psyche, made in Florence around 1732. There are also important groups of sculptures in wood, ivory and wax, among them wonderful miniature carvings in wood and a small but very high quality group of German Baroque ivories.

The 17th century was the century that lasted from January 1, 1601, to December 31, 1700, in the Gregorian calendar. The 17th century falls into the Early Modern period of Europe and in that continent was characterized by the Dutch Golden Age, the Baroque cultural movement, the FrenchGrand Siècle dominated by Louis XIV, the Scientific Revolution, and The General Crisis. This last is characterised in Europe most notably by theThirty Years' War, the Great Turkish War, the end of the Dutch Revolt, the disintegration of the Polish–Lithuanian Commonwealth and the English Civil War. Some historians extend the scope of the General Crisis to encompass the globe, as with the demographic collapse of theMing Dynasty, China lost approximately 30% of its population. It was during this period also that European colonization of the Americas began in earnest, including the exploitation of the silver deposits of Potosí in Upper Peru and Mexico, which resulted in great bouts of inflation as wealth was drawn into Europe from the rest of the world. European politics during the Crisis were dominated by the France of Louis XIV, where royal power was solidified domestically in the civil war of the Fronde, in which the semi-feudal territorial French nobility was weakened and subjugated to the power of an absolute monarchy through the reinvention of the Palace of Versaillesfrom a hunting lodge to a gilded prison in which a greatly expanded royal court could be more easily kept under surveillance. With domestic peace assured, Louis XIV caused the borders of France to be expanded to include, among other regions,Roussillon, Artois, Dunkirk, Franche-Comté, Strasbourg, Alsace and Lorraine. It was during this century that England's political system became unique in Europe – by the end of the century, the monarch was a symbolic figurehead and Parliament was the dominant force in government – a stark contrast to the rest of Europe, in particular Louis XIV's France.In the midst of this global General Crisis, there were victory and triumph: In the Near East, the Ottoman, Safavid Persian and Mughal empires grew in strength and the Sikhs began to rise to power in the Punjab. And marathas established in western India. Farther east in Japan, Tokugawa Ieyasu established the Edo period at the beginning of the century, starting the isolationist Sakoku policy that was to last until the 19th century. In China, the collapsing Ming Dynasty was challenged by a series of conquests led by the Manchu warlord Nurhaci, which were consolidated by his son Hong Taiji and finally consummated by his grandson, the Shunzi Emperor, founder of the Qing Dynasty. By the end of the century, Europeans were also aware of logarithms, electricity, thetelescope and microscope, calculus, universal gravitation, Newton's Laws of Motion,air pressure and calculating machines due to the work of the first scientists of theScientific Revolution, including Galileo Galilei, Johannes Kepler, René Descartes,Pierre Fermat, Blaise Pascal, Robert Boyle, Christiaan Huygens, Antonie van Leeuwenhoek, Robert Hooke, Francesco Redi, Isaac Newton, and Gottfried Leibniz, among other luminaries.

This object is part of "Scan The World". Scan the World is a non-profit initiative introduced by MyMiniFactory, through which we are creating a digital archive of fully 3D printable sculptures, artworks and landmarks from across the globe for the public to access for free. Scan the World is an open source, community effort, if you have interesting items around you and would like to contribute, email stw@myminifactory.com to find out how you can help
. 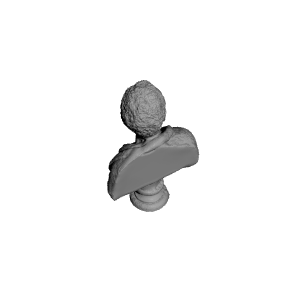 ×
4 collections where you can find Bust of an African Man at The Wallace Collection, United Kingdom by 3DLirious