3D
Featured Scan The World
2,942 views 216 downloads
1 collection
Community Prints Add your picture
Be the first to share a picture of this printed object
0 comments

Bust of Angélique d’Hannetaire (1749-1822), made by Gilles-Lambert Godecharle (1750-1835). The Royal Museum of Fine Arts of Belgium (Brussels, Belgium). Made with Capturing Reality.

Angélique D’Hannetaire, was a French actress and opera singer. She was the daughter of the actor and director D’Hannetaire and his wife, the actor Marguerite Hue. Angélique made her debut at the Théâtre de la Monnaie aged 12 in La Servante maîtresse by Pierre Baurans, after the work by Pergolesi, beside Alexandre Bultos (like her, a student of Ignaz Vitzthumb, music-master of the Théâtre de la Monnaie). She was active at the Monnaie from 1766 until 1775. She often performed the role of heroine in romantic parts, and she also acted as a singer in opera buffa. 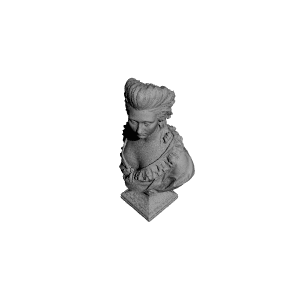 ×
1 collections where you can find Bust of Angélique d’Hannetaire by geoffrey.marchal