3D
Scan The World
1,931 views 83 downloads
1 collection
Community Prints Add your picture
Be the first to share a picture of this printed object
0 comments

Anna Haava (1864-1957) was one of the most outstanding Estonian poets at the turn of the 20th century. Characterized by an authenticity of feeling and ;usicality, as well as ballad-like ingenuousness, her love for poetry and nature lyrics introduced romantic notes to Estonian poetry. Her first verses were printed in 1886 in a book entitled Poems. This was followed by poetry collections entitled Waves, In the Cross Waves, and The Children of the North. Anna Haava also translated Greek mythology and the works of William Shakespeare, Johann Wolfgang Goethe, Friedrich Schiller, Hans Christian Andersen, and others. Many of her poems were set to music and these songs are still popular today. 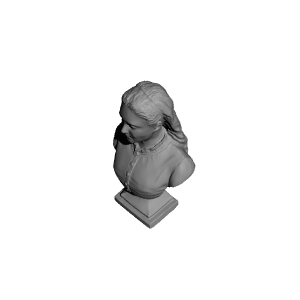