3D
Scan The World
3,279 views 300 downloads
1 collection
Community Prints Add your picture
Be the first to share a picture of this printed object
0 comments

This sculpture is composed of an ancient fragment - the bust and the left and back part of the head - restored in the modern period as Antinous, the young Bithynian favourite of the emperor Hadrian who died in AD 130 and was subsequently deified. Antinous's distinctive features are known from the numerous sculptures and images on coins found throughout the Roman Empire. In the modern period, his iconography became familiar especially after the discovery of the ancient relief portraying him, found in 1735 at Hadrian's Villa and now in the Albani collection. The Ludovisi sculpture may date to this period, when depictions of Antinous were at their most popular. 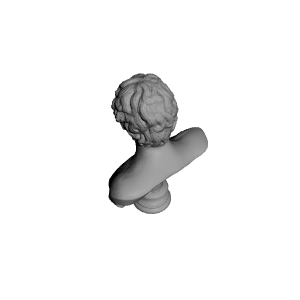