Bust of Antinous as Dionysus at The State Hermitage Museum, St Petersburg

3D
Scan The World
2,680 views 113 downloads
3 collections
Community Prints Add your picture
Be the first to share a picture of this printed object
0 comments

Bust of Antinous as Dionysus at The State Hermitage Museum, St Petersburg

Antinous was a handsome youth, a Greek from Bythinia. The favourite of the Roman Emperor Hadrian (117-138), he was tragically drowned in the Nile during a drip to Egypt with the Emperor in 130. According to one version, he died saving the Emperor's life. After the death of Antinous, Hadrian ordered that he be deified. His statues, as the gods Dionysius or Hermes, adorned Hadrian's villa at Tivoli just outside Rome. The Hermitage portrait was found during excavations at Tivoli in 1769. Antinous is shown as Dionysius, god of wine and merrymaking, his luxuriant locks of hair crowned with a branch of Italian pine. The young man's face is classically handsome and his idealized features recall a Greek statue of the Classical period. At the same time there are still traces of individual features, such as the thick brows over the small, close-set eyes. The expression of sadness is typical of many statues of Antinous, who died so young. In European art, the image of Antinous became synonymous with ideal male beauty. 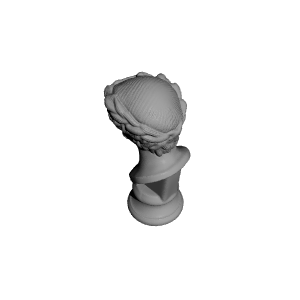 ×
3 collections where you can find Bust of Antinous as Dionysus at The State Hermitage Museum, St Petersburg by Scan The World