3D
360°
Scan The World
2,238 views 134 downloads
Community Prints Add your picture
Be the first to share a picture of this printed object
0 comments

Antisthenes (445 – c. 365 BC) was a Greek philosopher and a pupil of Socrates. Antisthenes first learned rhetoric under Gorgias before becoming an ardent disciple of Socrates. He adopted and developed the ethical side of Socrates' teachings, advocating an ascetic life lived in accordance with virtue. Later writers regarded him as the founder of Cynic philosophy.

This is a 2nd century AD copy of a Hellenistic period original. 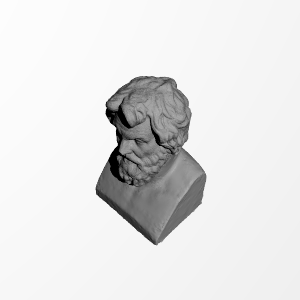