3D
360°
Featured Scan The World
3,685 views 238 downloads
1 collection
Community Prints Add your picture
Be the first to share a picture of this printed object
0 comments

The exciting rediscovery of this fine portrait of Augusta, Duchess of Cambridge by one of the Germany’s foremost 19th century sculptors, Christian Daniel Rauch, is mentioned in the 1996 monograph on the artist as ‘untraced’ (Simson, op.cit., p. 342). The plaster model was made in 1833 and is recorded as having been in the Rauch-Museum, Berlin but it is now lost. No other versions of this portrait are recorded.At the insistence of the German Grand Ducal family, Rauch visited Schloss Neustrelitz, the main residence of the ruling dukes and Grand dukes, in the summer of 1833. Augusta, Duchess of Cambridge was visiting at the same time and Rauch was asked to create a portrait bust of her. He modeled the plaster of the Duchess on the 27th of July and as Rauch noted in his diary, the initial portrait was completed in clay on August 15 and one day later it was “already formed” (Simson, op. cit., p. 342). In his letters, Rauch notes that the marble version of the portrait was completed in 1834 and that the bust was intended to be delivered to the Duke of Cambridge at Christmas in 1834 but due to damage on the socle, Rauch had to delay the shipment. The marble was finally sent to the Duke in January of 1835, presumably to the Duke and Duchesses’ home in Hanover. While some of the literature erroneously mentions that the marble bust was dated 1834 (the year Rauch finished his carving), we know now that he physically dated the marble (the present piece) 1833, the date the original model was completed. Indeed, it has been brought to our attention that Rauch frequently dated his marbles to the year he produced the original model.

During the course of his prestigious career, Christian Daniel Rauch gained favor with the King of Prussia, Friedrich Wilhelm III, who recognized the young sculptor's talents and awarded him a stipend to travel to Italy in 1805. It was in Rome where Rauch befriended Antonio Canova and Bertel Thorvaldsen, the famous Neoclassical sculptors, and developed his own distinctive style. Rauch’s first official large assignment came in 1811, when he was commissioned to make the funerary monument of Queen Louise of Prussia. Returning permanently to Berlin after 1818, his reputation as an excellent portraitist now firmly established, he became one of the most desired sculptors for busts and statues of military officials, aristocrats and monarchs, and received commissions from numerous European royal families.

From 1818 until the accession of Queen Victoria, and the separation of the British and Hanoverian crowns in 1837, the Duchess of Cambridge lived in Hanover, where the Duke served as viceroy on behalf of his brothers, George IV and William IV. The Duke and Duchess returned to Great Britain, where they lived at Cambridge Cottage, Kew, and later at St. James's Palace. She was buried at St. Anne's Church, Kew, but her remains were later transferred to St. George's Chapel, Windsor Castle. 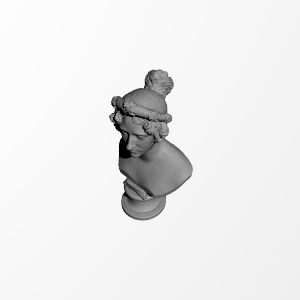 ×
1 collections where you can find Bust of Augusta Wilhelmine Luise Princess of Hesse-Kassel, Duchess of Cambridge by Janim