3D
Scan The World
3,306 views 125 downloads
Community Prints Add your picture
Be the first to share a picture of this printed object
0 comments

Portrait busts were often created as memorials. This bust was a model for the tomb of Cardinal Orazio Mattei (1621-1688). The bust was made during the Cardinal's lifetime and installed in the church of San Francesco a Ripa, Rome, after his death. The model was made in soft clay, which could be easily shaped, allowing an artist to work quickly and creatively. The fired clay is known as terracotta, literally meaning 'baked earth'. 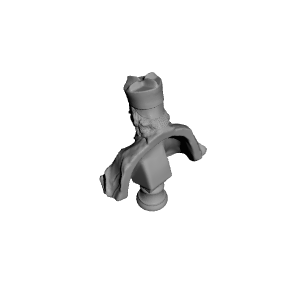