Bust of Antinous as Dionysus at The Réunion des Musées Nationaux, Paris

3D
Scan The World
4,287 views 224 downloads
4 collections
Community Prints Add your picture
Be the first to share a picture of this printed object
0 comments

Bust of Antinous as Dionysus at The Réunion des Musées Nationaux, Paris

Approximately a century after the crucifixion of Christ, another young man of humble, Middle Eastern origin died and was acknowledged as a god.

Antinous, from the province of Bithynia on the Black Sea coast, was the beloved companion of the Roman Emperor Hadrian, and in October 130 AD he drowned in the River Nile. No one quite knows how this came about. It might have been an accident. It might have been an act of self-sacrifice. It might even have been murder. Whatever the cause, Hadrian was grief-stricken and, soon after, he declared that the youth had been reborn as a god. He built a great city, Antinopolis, at the site of the tragedy, and a cult to his dead favourite was established that lasted well into the 4th century AD.

This new god sprang fully armed with an instantly identifiable imagery. In death, as in life, Antinous’ appeal lay in his youth and beauty, and his face became one of the best known in the Roman world. The handsome, sensual features of this statue – with its round face, almond eyes, strong brows, full lips and thick, tousled hair – are found on many other representations from all over Hadrian’s Empire. Coins bearing the deified Antinous’ image have been found as far north as Godmanchester in Britain.

Although Roman Emperors were customarily deified after their deaths, it was unique for a commoner to be so honoured, and in art Antinous was often assimilated with other, more traditional gods. Sometimes he is represented as Apollo, the eternally young and beautiful Greek deity. At other times he is the messenger god Mercury (Greek Hermes). A number of statues show the deified Antinous in Egyptian costume, and here an association with the Egyptian god Osiris is possible.

The Greek city of Mantineia became a centre for the worship of Antinous. A festival and games were held there in his honour every four years, and in the stadium he was depicted as the wine god Dionysos (Roman Bacchus). It is as this deity, his luxuriant hair bound with ivy tendrils, that he appears in the Fitzwilliam bust.

The identification between Dionysos and Antinous went beyond the visual. Like the Greek wine god, Antinous was believed to have died and been reborn. Members of his cult would re-enact his death and resurrection, and were thus offered hope for their own immortality.

Antinous was also prayed to for more general, earthly acts of benevolence. Inscriptions from the time refer to him as ‘Antinous the Good,’ and, as a new deity, he was approached to intercede with the older, more established gods. There are records of his appearing and healing the sick in dreams. An unrequited lover in Egypt even invoked Antinous to help him win the object of his affection.

This bust was unearthed in the 18th century at the site of Hadrian’s great villa at Tivoli, where it is now becoming clear there was a huge sanctuary, including an area that was possibly dedicated to the worship of Antinous. The Scottish painter, archaeologist and dealer Gavin Hamilton secured it for The Marquess of Shelburne, whose personal collection of antiquities in Lansdowne House, London, it graced until 1930.

More than twenty images of Antinous have been unearthed from Hadrian’s Villa. A cast of one of these – now in the Capitoline Museum in Rome – can be seen in a niche high up in the entrance hall of the Fitzwilliam.

As Christianity gradually took hold in the Europe, the cult of Antinous died out. But the romance of his tale was not forgotten. 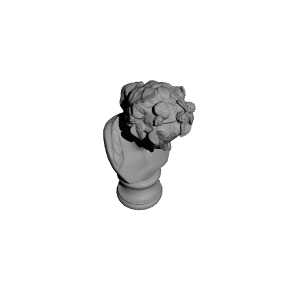 ×
4 collections where you can find Bust of Antinous as Dionysus at The Réunion des Musées Nationaux, Paris by RMN