This important plaster bust of Napoleon is one of exceptionally few portraits of Napoleon made before his coup d’etat in 1799. In 1798, the sculptor Charles-Louis Corbet was commissioned by the revolutionary government to portray General Bonaparte from life. This first model was done in plaster, and exhibited at the Salon in July 1798, with the inscription “…fait d’après nature”. Napoleon must therefore have sat to Corbet before he departed for his ill-fated Egyptian campaign later that year.

The image of Napoleon seen here is markedly different from the short-haired, visually plain man seen as Emperor in, for example, the portraits of Jacques-Louis David. Corbet’s bust, like Antoine-Jean Gros’ 1801 portrait of Napoleon at the Bridge of the Arcole (Louvre), shows the young general as a consciously heroic, and even handsome man. The bust not only reflects Napoleon’s growing popularity in France at the time, after his brilliant victories in Italy, but may well have played a role in the creation of a personal cult around the future Emperor.

Charles-Louis Corbet (January 1758 – 10 December 1808) was a French sculptor. He is known for a bust that he made of Napoleon and a statue of a French Dragoon on the Arc de Triomphe du Carrousel. 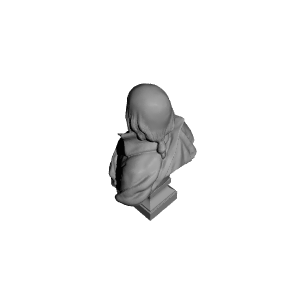 ×
1 collections where you can find Bust of General Napoleon Bonaparte at The Grand Curtius Liege, Belgium by IOxOI
×
Tihon
@GremlinWS
1
Printed on: Anycubic Photon
Material: Resin
Posted at: 21st October 2021