3D
Scan The World
4,049 views 577 downloads
4 collections Add to collection
14 0
Community Prints Add your picture
Be the first to share a picture of this printed object
0 comments

The bust represents the Greek hero Herakles (Roman Hercules). Pentelic marble (?); some restoration. The head closely resembles that of the 'Herakles Farnese'. The Farnese statue was a Roman copy after a bronze original by the renowned late classical Greek sculptor Lysippos.

This impressive head of Hercules, set on a modern bust, was presented to the Museum by Sir William in 1776. It was restored in Rome, probably under the supervision of Gavin Hamilton, on the model of the celebrated Hercules Farnese. This was itself in Rome until 1787, when the Farnese collection was transferred to Naples. Sir William owned a statuette copied in white marble from the Farnese Hercules, said to be by Pisano. This was brought back to England at the end of Hamilton's stay in Naples and sold subsequently.
Sir William was anxious that his gift should be well displayed in the Museum. On 2 January 1776 he wrote to Charles Greville from Caserta: 'Do let the Hercules bust be well placed, Hamilton [Gavin] declares the head is better than that of the Farnese.' In the Museum, during Hamilton's lifetime, the bust was displayed on the Capri altar (Jenkins & Sloan 1996, no. 130a) at the top of the great staircase in old Montagu House. The pedestal support was designed by Joseph Nollekens.
LITERATURE: British Museum Archives, CM, 1784, pp. 1855, 1888; Morrison, no. 61; d'Hancarville, MS Catalogue, i, pp. 5-6; Ramage, 1989a, p. 705, n. 18; Ramage, 1990a, pp. 477-8; Moreno, p. 359. 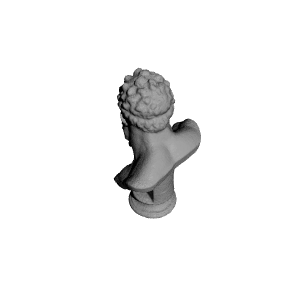 ×
4 collections where you can find Bust of Hercules by nebulousflynn