3D
Scan The World
3,042 views 288 downloads
1 collection
Community Prints Add your picture
Be the first to share a picture of this printed object
0 comments

This bust of Jean-Baptiste Colbert by Antoine Coysevox, is a replica of a bust of the the Minister of Finances of France, who served from 1665 to 1683 under the rule of King Louis XIV. The original was executed under the order of the Academy of Painting and Sculpture and given to Colbert, then protector of the institution in 1677.

Jean-Baptiste Colbert achieved a reputation for his work of improving the state of French manufacturing and bringing the economy back from the brink of bankrupcy. Historians note that, despite Colbert's efforts, France actually became increasingly impoverished because of the King's excessive spending on wars. Colbert worked to create a favourable balance of trade and increase France's colonial holdings. 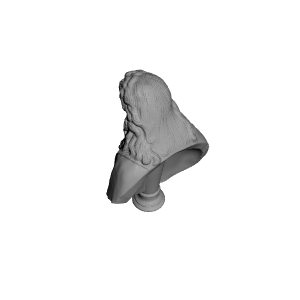