3D
Scan The World
2,653 views 104 downloads
Community Prints Add your picture
Be the first to share a picture of this printed object
0 comments

José-Maria de Heredia (22 November 1842 – 3 October 1905) was a Cuban-born French poet. He was the fifteenth member elected for seat 4 of the Académie française in 1894. He was granted French nationality in 1893 and was subsequently elected to the Académie française on 22 February 1894, in the place of Charles de Mazade the publicist. Few purely literary men can have entered the Academy with so few credentials. A small volume of verse; a translation, with introduction, of Diaz del Castillo's History of the Conquest of New Spain (1878–1881); a translation of the life of the nun Alferez (1894), Thomas de Quincey's "Spanish Military Nun"; one or two short pieces of occasional verse; and an introduction or so – this is but small literary output. But the sonnets are of their kind among the most skilled of modern literature. "A Légende des siècles in sonnets" M. François Coppée termed them. In 1901 de Heredia became librarian of the Bibliothèque de l'Arsenal at Paris. He died at the Château de Bourdonné in Seine-et-Oise on 3 October 1905, having completed his critical edition of André Chénier's works.

This bronze bust was created by Victor Segoffin and is on permanent display in the Jardin du Luxembourg, Paris.

The full sculpture can be found here. 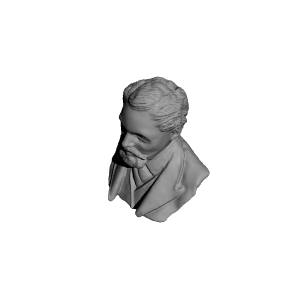 ×
0 collections where you can find Bust of Jose Maria de Heredia in The Jardin du Luxembourg, Paris by Scan The World