3D
Scan The World
3,541 views 248 downloads
3 collections
Community Prints Add your picture
Be the first to share a picture of this printed object
0 comments

This is a colossal head of Lucius Verus, co-emperor with Marcus Aurelius from AD. 161-169. Lucius' features are familiar from a number of other portraits. The monumental dimensions of his efficy, which exemplifies the transition from the sensitive works of the Antonian period to the more extravagant baroque style, served to glorify the ruler after his death.

This colossal head, mounted on a modern bust, is one of the finest existing portraits of Lucius Verus, who was a co-emperor from AD 161 until his death from the plague in 169. The prince's features are recognizable from many other portraits - notably his luxuriant hair and beard, portrait here with deeply sculpted curls.

This portrait was one of a pair, with a similarly-sized bust of Marcus Aurelius, who was emperor from AD 161-180. Both come from a villa belonging to Lucius Verus in Acqua Traversa, near Rome. The magnified, larger-than-life representation suggests that it was a posthumous work, probably commissioned by Lucilla, the wife of Lucius Verus and daughter of Marcus Aurelius. The piece was therefore probably made sometime between the death of Marcus Aurelius in AD 180, and that of Lucilla in AD 183.

This portrait is exceptional both for its size and its state of preservation. It is also one of the most striking expressions of the baroque style which came into fashion in the Roman empire during the late second century, representing a complete break with classical tradition. The exaggerated volumes of the hair and beard, deeply sculpted by the artist, contrasts with the extraordinary smoothness of the face. These skillful effects were taken to extremes during the reign of Commodus (AD 180-92) before the Severan dynasty heralded a return to more restrained styles. 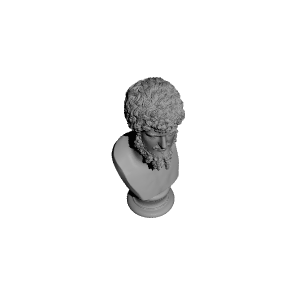 ×
3 collections where you can find Bust of Lucius Verus at The Réunion des Musées Nationaux, Paris by RMN