3D
Scan The World
2,100 views 60 downloads
Community Prints Add your picture
Be the first to share a picture of this printed object
0 comments

This bust of Lucius Verus is of an extremely different style of work than the others that have been made. The facial hair is much more subtle and the face rounded which means it was created long before he became emperor; the facial features still have an air of fierceness, suggesting he was born into a family of power.

Verus (15 December 130 – 169) was the Roman Emperor from 161 to 169. Born Lucius Ceionius Commodus, with the same name as his father, he became Lucius Aelius Commodus when the latter was adopted by Hadrian, since both father and son had to change their names accordingly. When he was adopted by Caesar Antoninus Pius in February 138, his name was changed to L. Aelius Aurelius Commodus. His name changed again following his ascension in 161. He ruled together with his adoptive brother Marcus Aurelius as co-emperor from 161 until his own death in 169. During his reign, the Roman Empire defeated a revitalized Parthia in the east: Verus's general, Avidius Cassius, sacked their capital, Ctesiphon, in 164. He was deified by the Roman Senate as the Divine Verus (Divus Verus).

There are some support on the model but easy to clean, model is quite solid, there is no risk to brake any part on the model when supports cleaning. Enjoy your printing. 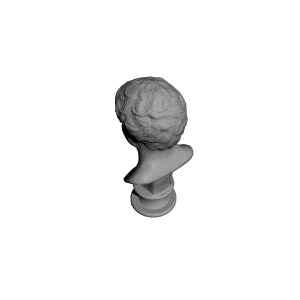 ×
0 collections where you can find Bust of Lucius Verus at The State Hermitage Museum, St Petersburg by Scan The World