This plaster bust originates from the well known Equestrian Statue of Marcus Aurelius, housed at the Capitoline Museums, Rome (Inv.MC3247). The head of the horse, also scanned, can be downloaded here.

There were many equestrian statues in ancient Rome at the time of Marcus Aurelius' death. Late Imperial descriptions of the areas of the city listed 22 such statues, called equi magni, were of the same scale to sculptures such as this one. The statue of Marcus Aurelius is the only one to have survived to the present day, mostly thanks to its constant transferral between leaders up until 1538 when Pope Paul III ordered for it to be moved to the Capitoline Hill, which had become the head quarters of the city's authorities in 1143.

A year after its arrival, the Roman Senate commissioned Michelangelo to refurbish the statue. The great Florentine artist did not just limit himself to planning an appropriate site for the monument, but made it in central element to the magnificent architectural complex known as the Piazza del Campidoglio. 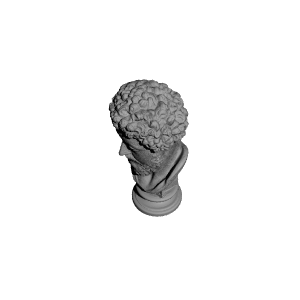