3D
Featured Scan The World
2,417 views 135 downloads
Community Prints Add your picture
Be the first to share a picture of this printed object
0 comments

This bust of a young Marcus Aurelius was discovered on the site of the Roman villa of Chiragan (Martes-Tolosane, Haute-Garonne).

Atoninus Pius had long favoured Marcus Aurelius in his reign of serving as emperor, producing several busts in various styles in his honour. This earled Chiragan one of its finest busts of Aurelius, created around 145 AD. The years 144-145 were very important for the young Marcus Aurelius; he was commissioned to be a second consulate and married Faustina, the daughter or Antoninus Pius. This marriage sealed Pius's choice to destine Aurelius to the Emptire.

A new bust was thus created from the original 'youthful' style of Marcus Aurelius portraits, slightly aging the sitter by adding a nascent beard and moustache as to usher the young Emperor into adolescence. The bust is very incricately produced, with a beautiful effect of drapery on the pilitary coat (paludamentum), fixed by a fibula flower on the right shoulder. The moustache and the beard, pushing scantily on the edges of his jaw, compliment a swollen mass of hair and abundantly hollowed and twisted curls. The iris of the eye is engraved and the pupil doubly punctuated, a feature soon to become canon in the conventional Roman portrait. 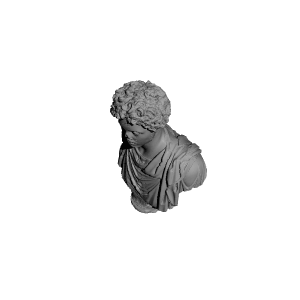 ×
0 collections where you can find Bust of Marcus Aurelius, Young by Musée Saint-Raymond