3D
Scan The World
2,089 views 112 downloads
1 collection
Community Prints Add your picture
Be the first to share a picture of this printed object
0 comments

Melpomene, the ancient Greek Muse of Tragedy, was, as here, often represented with abundant hair garlanded with vines, referencing the Dionysiac origin of the art form and the exaggerated masks worn by tragedic actors. The present, exuberant, bust copies a Roman full-length statue of the Melpomene dating to the 2nd century AD, now in the Vatican Museums, which shows the Muse in elaborate Greek dress, presenting a tragedic mask in her right hand. Discovered in the Villa di Cassio near Tivoli in 1774, the statue appears to have achieved instant recognition and inspired various copies by neoclassical sculptors active in the Eternal City. Melpomene was among eight antiquities chosen by Baron Theodor von der Ropp in 1804 to serve as models for commissions after the antique from Bertel Thorvaldsen (1770-1844), who was then in the early stages of his illustrious career. Thorvaldsen’s bust of Melpomene, whose present location is unknown, survives in a photograph from 1927. Though not identical with the present bust, Thorvaldsen’s version is so similar in form as to indicate that both busts originated in the same milieu. The finesse of its carving suggests that the present bust could be the work of a talented sculptor from Thorvaldsen's circle.

This statue is part of the Old Master Sculpture & Works of Art Sale on the 6th of July at Sotheby's London, Lot 155. 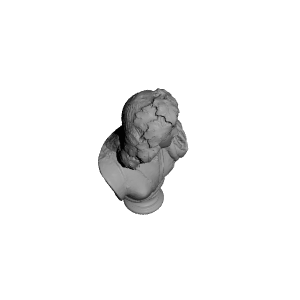