This bust is a modern rework of the bearded soldier in the famous antique Pasquino group. Numerous identifications have been given to the figures, including Ajax carrying the body of Patroclus. However, following an argument proposed by Visconti in 1788, the group is today held to represent Menelaus carrying the dead body of Patroclus.

The present bust, with its elaborate classicizing helmet, is particularly similar to the figure in a version of the group held in the Loggia dei  Lanzi, Florence. This marble, which had been acquired by Cosimo I, Grand Duke of Tuscany, in 1570, was restored by Lodovico Salvetti, using a model by Pietro Tacca in the seventeenth century, and again by Stefano Ricci in the early nineteenth century, before being installed in its present location. The model itself is thought to derive from a 3rd century B.C. Pergamene original.

In Greek mythology, Menelaus was a king of Mycenaean (pre-Dorian) Sparta, the husband of Helen of Troy, and a central figure in the Trojan War. He was the son of Atreus and Aerope, brother of Agamemnon, king of Mycenae and, according to the Iliad, leader of the Spartan contingent of the Greek army during the War. Prominent in both the Iliad and Odyssey, Menelaus was also popular in Greek vase painting and Greek tragedy, the latter more as a hero of the Trojan War than as a member of the doomed House of Atreus. 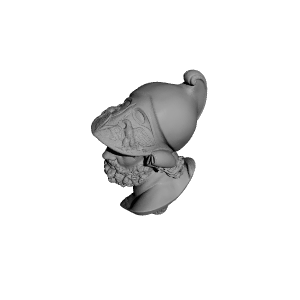 ×
17 collections where you can find Bust of Menelaus by Scan The World
×
Montague Flange
@MontyFlange
2
Posted at: 30th March 2019