Bust of Pericles at The British Museum, London

Bust of Pericles at The British Museum, London

Juxtaposed with The Pallas of Velletri at The Louvre (on Scan the World), the similarities of the helmet and expression suggest that the two sculptures were made by the same artist, Cresilas (or Kresilas; concluded by Hinks, Fittschen, Muss and Schubert; queried by Lippold). The lettering inscribed on the front of the bust ПΕΡΙΚΛΕΣ translates to the name Pericles. Pericles was known as a great warrior and legislator, depicted here with well carved facial hair (as seen in Trajanic and Antonine depictions of men in power, see 1, 2) and a Helmet.

This is a Roman copy of an original portrait which was perhaps created in Perikles' own day, or shortly after his death. However, it probably bears little physical resemblance to Perikles' actual appearance, showing an ideal type of the mature soldier citizen, wearing a helmet pushed back on his head.
This object is part of "Scan The World". Scan the World is a non-profit initiative introduced by MyMiniFactory, through which we are creating a digital archive of fully 3D printable sculptures, artworks and landmarks from across the globe for the public to access for free. Scan the World is an open source, community effort, if you have interesting items around you and would like to contribute, email stw@myminifactory.com to find out how you can help.
Show more Show less
License
Printing Details 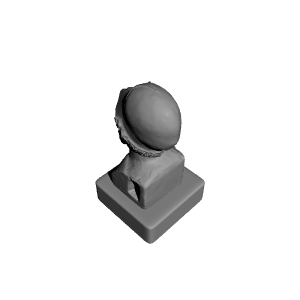 ×
1 collections where you can find Bust of Pericles at The British Museum, London by Scan The World
×
Catherine Wood
@Catherine_W
2
Posted at: 03rd December 2021

These prints were finished with copper powder and PVA glue.