3D
360°
Scan The World
3,800 views 432 downloads
2 collections
Community Prints Add your picture
Be the first to share a picture of this printed object
0 comments

This distinctive bust of Apollo is carved after the celebrated Apollo Belvedere in the Vatican, where it was first recorded in 1509 (Haskell and Penny, op. cit., p. 148). The present bust is unusual since, unlike the majority of 18th-century busts after the Vatican original, this is not a direct copy. Its unusual curved truncation and prominently open-mouthed expression, deviate from the original and accord with the late Roman Baroque style. The expression, with large, unincised eyes, and wavy tendrils of hair, recall St Sebastian by Paolo Campi (active 1702-1742) in the church of S. Agnese in Piazza Navona, Rome (Engass, op. cit., fig. 182). The truncation recalls the expressive busts carved in Rome by Lambert-Sigisbert Adam (1700-1759) and other late Baroque Roman busts. Compare, for example with his Neptune and Amphitrite at Sanssouci, Potsdam, circa 1726. Adam carved after the antique, most famously executing a Ludovisi Mars for Cardinal Melchior de Polignac in 1730, also now in Potsdam. Note the beautifully finished reverse which recalls the surface of the terrasse of the S. Camillus de Lellis in St Peters Basilica, Rome, by Pietro Pacilli (1720-1772), 1753; Pacilli carved the Apollo Belvedere at Woburn Abbey. The virtuoso undercutting in the hair would no doubt have been fully appreciated by the Roman sculptor Benedetto Pistrucci from whose collection the bust was inherited. 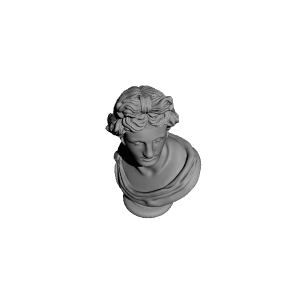