Bust of the so-called Phocion

3D
Featured Scan The World
2,887 views 345 downloads
2 collections
Community Prints Add your picture
Be the first to share a picture of this printed object
0 comments

Bust of the so-called Phocion

This head was originally considered to be that of Hermes but is now widely believed to depict Phocion, an Athenian statesman and strategos and the subject of one of Plutarch's Parallel Lives.

The original sculpture (ORIG1129) that this cast was made can be found at the Pio Clementino Museum (Vatican Museums). The provenance of the original is not clear; it is presented as a full figure sculpture in the Vatican Museums though its head and body are actually of separate origin. The body is from an original of the fifth century BC whereas the head is a copy of a portrait of the late fifth or early fourth centry BC. The sculpture was initially thought to be that of Hermes, but was later decided to be of Phocion.

The combination of the head and body of the original sculpture must be a modern act as the two sculptures are catalogued as casts at The Statens Museum for Kunst: Body and Head. 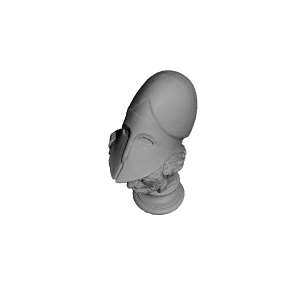