3D
Scan The World
5,846 views 484 downloads
4 collections
Community Prints Add your picture
Be the first to share a picture of this printed object
0 comments

Voltaire was renowned throughout Europe for an unceasing stream of brilliant polemics mocking organized religion and other institutions that suppressed personal freedom. Although this included most national governments of the time, he was courted by "enlightened monarchs" such as Frederick the Great of Prussia and Empress Catherine of Russia, each of whom acquired versions of this bust. Repeatedly banished from Paris for his many offending publications, Voltaire spent the last decades of his life in Ferney, on the Swiss border.

Houdon modeled Voltaire's portrait shortly after the celebrated exile's triumphant return to Paris in early 1778, a few months before his death. Immortalizing the aged Voltaire's physical frailty and sardonic expression, the bust was widely acclaimed as the closest likeness ever made of him. Crowds thronged Houdon's studio to view the work and the entrepreneurial sculptor soon began to produce the portrait in a variety of formats (different hairstyles and dress) and a wide range of materials (marble, bronze, plaster and terracotta). Several examples in this particularly classical format (which parallels that of the Diderot bust, 1974.291) are known. With his bald, bony skull, bare chest, and simple truncation, it is clearly meant to emulate portraits of Roman antiquity.

The present bust was one of several Houdon portraits acquired in Paris by Count Alexander Stroganov. The Russian expatriate had visited Voltaire in Ferney in 1770, en route to Paris, and once in the capital he soon became acquired with Houdon. They were both affiliated with the Masonic lodge of the Nine Sisters (to which Houdon donated another copy of the Voltaire). Stroganov had already commissioned Houdon's portrait of the empress Catherine (now in the Hermitage), which, along with the present bust and that of Diderot, was for many years displayed in the Stroganov Palace Museum in Saint Petersburg.

(source; metropolitan museum of art. scanned from a cast at the atelier des moulages, RMN) 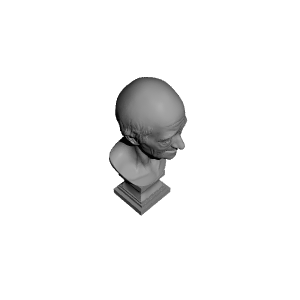 ×
4 collections where you can find Bust of Voltaire at The Réunion des Musées Nationaux, Paris by RMN