3D
Scan The World
2,282 views 141 downloads
1 collection
Community Prints Add your picture
Be the first to share a picture of this printed object
0 comments

This bust titled 'The Catholic Religion' is the remaining part of a plaster model (h. 4.10m) created by Canova as a maquette part of a larger, colossal statue (h 8m) that he wanted to erect at his own expense in St. Peter's to pay homage to religion and the final return to Rome by Pius VII after the French intervention. Canova began working on the sculpture in 1814 by sending the model to the pontiff. In the same year he began working on this plaster piece, now permanently housed in the Accademia Nazionale di San Luca, with another stored in Gipsoteca in Possagno.

The project encountered a number of difficulties that prevented its completion, including their stability and the placement of their location.

The sculptor eventually decided to allocate the sculpture at a Church in Possagno, thus controvesially replacing a Protestant sculpture manning a tomb of 'Countess Brownlow in Belton' of the same church.

The colossal plaster was donated to the Academy by Canova's brother in 1830. Much of the sculpture was badly damaged, leaving intact only the bust with chiton and whose tiara depicts 'the symbol of Trinity' and the 'one eye open triangle symbolizing the all-seeing providence'. 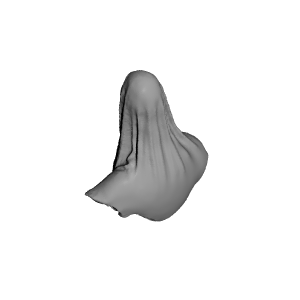