Cain after killing Abel at The Jardin des Tuileries, Paris

3D
Scan The World
3,820 views 230 downloads
1 collection
Community Prints Add your picture
Be the first to share a picture of this printed object
0 comments

Cain after killing Abel at The Jardin des Tuileries, Paris

This monumental sculpture was completed in 1896, sculpted by Henri Vidal (Charenton, 1864 - Cannet, 1918) out of marble and placed in the Jardin des Tuileries in Paris in 1982. Cain and Abel were, according to the Book of Genesis, two sons of Adam and Eve. Cain is described as a crop farmer and his younger brother Abel as a shepherd. Cain was the first human born and Abel was the first human to die. Cain committed the first murder by killing his brother. Interpretations of Genesis 4 by ancient and modern commentators have typically assumed that the motives were jealousy and anger. In the Cain and Abel story found in the Quran, the text refers to them simply as the sons of Adam.

1Adam knew his wife Eve intimately, and she conceived and bore Cain. She said, "I have had a male child with the LORD's help."

2Then she also gave birth to his brother Abel. Now Abel became a shepherd of a flock, but Cain cultivated the land. 3In the course of time Cain presented some of the land's produce as an offering to the LORD.4And Abel also presented [an offering] – some of the firstborn of his flock and their fat portions. The Lord had regard for Abel and his offering, 5but He did not have regard for Cain and his offering. Cain was furious, and he was downcast.

6Then the LORD said to Cain, "Why are you furious? And why are you downcast? If you do right, won't you be accepted? But if you do not do right, sin is crouching at the door. Its desire is for you, but you must master it."

8Cain said to his brother Abel, "Let's go out to the field."

And while they were in the field, Cain attacked his brother Abel and killed him.
—Genesis 4:1-8
This object is part of "Scan The World". Scan the World is a non-profit initiative introduced by MyMiniFactory, through which we are creating a digital archive of fully 3D printable sculptures, artworks and landmarks from across the globe for the public to access for free. Scan the World is an open source, community effort, if you have interesting items around you and would like to contribute, email stw@myminifactory.com to find out how you can help. 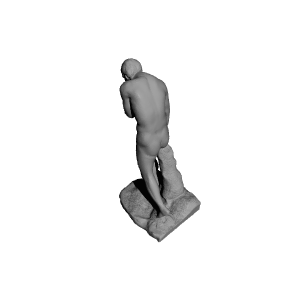 ×
1 collections where you can find Cain after killing Abel at The Jardin des Tuileries, Paris by Scan The World