Cain and his Children Accursed of God

3D
Scan The World
2,266 views 154 downloads
2 collections
Community Prints Add your picture
Be the first to share a picture of this printed object
0 comments

Cain and his Children Accursed of God

Although Romanticism made its appearance in painting from 1820 onwards, there was a gap of ten years before it was expressed in sculpture at the Salon of 1831 by Duseigneur's Orlando Furioso, with its bulging muscles and twisted limbs, and the Tiger and Crocodile by Barye. These works were soon followed by Etex's Cain, executed in Rome, as a bravado gesture because he did not win the Grand Prix, and by the creations of Préault. 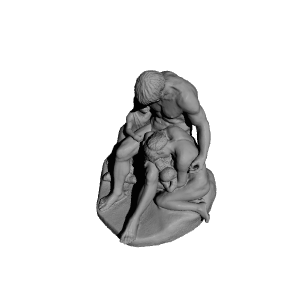